What is a CSR?

A Certificate Signing Request (CSR) is a message sent to a Certification Authority (CA) to request a public key certificate for an entity, where the entity is the subject of the certificate, for example, a web server. The CSR is typically generated by the software that requires a certificate; most web servers, for example, are able to generate their own CSRs. Before a CSR can be created, however, the software creating the CSR must generate a key pair; the key pair comprises a public and private key. The public key is bundled with the subject's name, and other information to form the CSR. The private key is used to sign the CSR and should be stored securely.

The most widely used format for CSRs is defined by RSA in the PKCS#10 specification. Another, far less common CSR format is the Signed Public Key and Challenge (SPKAC), which was defined by Netscape for use inside their browsers. Unless otherwise stated, this FAQ describes the PKCS#10 CSR.

What does a CSR contain?

To view the contents of a CSR, use our CSR Decoder or the OpenSSL tool.

The top level ASN.1 description of a CSR is shown below:

The PKCS#10 CSR can be considered as two parts:

The diagram below shows these two parts. The Certification Request Information part has four fields and is the part of the CSR signed by the entity's private key. The Signature part has two fields. 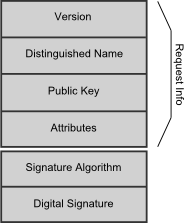 The purpose of the optional Attributes is threefold: to provide the CA with additional information about the entity such as a postal address, to communicate attributes to be included in the certificate (for example an email address), and to provide a challenge passphrase that can be used at a later stage if required to revoke the certificate. Some attributes that may be useful are defined in PKCS#9.

The signature over the Certification Request Information part proves to the CA that the requester is in possession of the corresponding private key. This is known as Proof of Possession (PoP).

What's the process for constructing a CSR?

The process by which a CSR is constructed involves the following steps:

The CSR is often constructed by the application requesting the certificate, such as a web server.

What size should the RSA key be?

When deciding what size key to use, consideration should be given to your security requirements. What data is being protected? What threats may it be exposed to? How long does it need to be protected for? The larger the key, the greater the security it provides, but also the slower the cryptographic operations.

Consideration should also be given to compatibility. What applications will be using the certificate? Are there any restrictions on the key sizes the applications can work with?

Can I check for Debian weak keys?

Let's look at some of the background to this issue with Debian based systems. Back in May 2008, the Debian team announced that Luciano Bello had discovered a bug in the random number generator of the Debian OpenSSL package. This meant that all SSL and SSH keys generated on Debian based systems released between September 2006 and May 2008 may be vulnerable. There are many Debian based systems including but not limited to: Ubuntu, Damn Small Linux, Linspire and Xandros. The Debian Security Team disclosed this vulnerability in Debian Security Advisory 1571. The best resource on this vulnerability is the Debian Wiki. It is estimated that a private key generated by the flawed crypto package has between 15 and 17 bits of entropy. In other words, not secure. To check that your CSR or certificate does not contain a weak RSA key from this buggy version of OpenSSL you can use our online CSR Decoder and Certificate Decoder.

Below is an example of a CSR that has a weak key:

Please also see our article over at Cert Logik that has more examples of Debian weak keys in CSRs and Certificates and also more information on the tools you can use to locate Debian weak keys.

What does the CA do with the CSR?

The most widely used syntax for a CSR is defined by the PKCS#10 specification. It is possible to encode a PKCS#10 CSR in binary or text formats.

The text or PEM (Privacy Enhanced Mail) formatted CSR is the binary CSR after it has been Base-64 encoded to create a text version of the CSR. It also includes additional header and footer lines which enclose the Base-64 and provide an indication of the content. A text formatted CSR can be viewed in a text editor or pasted into an email. Below is an example of a PEM encoded CSR. You can use our CSR Decoder to decode the CSR, verify its signature, and display the information contained within it.

The binary formatted CSR is also known as the ASN.1 or DER encoded CSR. It is an ASN.1 structure (defined by PKCS#10) that has been encoded using the Distinguished Encoding Rules (DER). If you open a binary encoded CSR in a text editor you will see lots of strange looking characters.

How do I generate a CSR?

While some applications that use certificates can generate keys and CSRs themselves, others rely on an external tool such as OpenSSL to do the work. The command line below shows how to generate a CSR using OpenSSL. After providing OpenSSL with information about the certificate you will end up two files: a new private key called server.key and a certificate request called server.csr.

How do I decode a CSR?

We've written a web based CSR Decoder tool to decode CSRs online. If your CSR contains information that you do not want to send over the Internet (such as a challenge passphrase), you can decode CSRs locally on your own machine using the following OpenSSL command:

How do I verify the signature on a CSR?

Our CSR Decoder will verify the signature on a CSR. Alternatively you can use the following OpenSSL command:

How do I convert a CSR from PEM to DER format?

How do I convert a CSR from DER to PEM format?

Should the DN be encoded as UTF-8?

There was a PKIX Working Group requirement that all distinguished names (DNs) should be encoded as UTF-8 after December 31 2003. However, the requirement has since been removed and most CAs ignored it anyway because of the interoperability issues it would cause. The majority of CAs use strings called PrintableString to encode the attributes of a DN.

---
Feedback and suggestions about this article are appreciated and can
be emailed to the author Phil Ratcliffe at [email protected]
Last modified: 20th Sept 2017

Please do not hesitate to contact us if you have any comments or questions about an article.